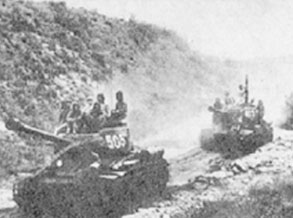 However, numerous evidence shows that the North's claim is all false.

In particular, relevant data released by communist nations, especially Russia, after the war clearly shows that the Soviet Union, China and North Korea premeditated the war and began the invasion to South Korea. Moreover, a large number of communist officials who participated in the war testified that North Korea invaded South Korea.
Also, the former President of Russia Boris N. Yeltsin provided the former President of Korea Kim Young-sam, who was on his state visit to Russia in 1994, with classified documentation related to the Korean War that says the war began as Joseph V. Stalin approved Kim Il-sung's request.
Therefore, those who insisted that South Korea invaded the North lost the grounds to their claim. On June 26, 1950, Uijeongbu, a city located just north of Seoul, was captured by the North Korean forces. The South Korean forces made utmost efforts to establish a defensive post. At night of June 27, 1950, the North Korean forces resumed the attack and at the dawn of June 28, 1950, Seoul fell into the hands of North Korean forces.