This was the battle in which the Australia3rd Battalion as a member of the British 27th Brigade defeated the North Korea 239th Regiment near the Youngyu-ri area and achieved a connection with the U.S. 187th Airborne Brigade dropped at Sukcheon. This Battalion were originally planned to be attached to the U.S. 24th Division and attack Sinanju - Jeongju after the U.S. 1st Army Corps captured Pyongyang, but they launched an airborne operation near the Sukcheon and Suncheon area following Pyongyang's capture. When the U.S. 187th Airborne Brigade were in a great danger from the attack by the North Korean Army deployed at Youngyu-ri - Eopa-ri, this Battalion were ordered to rescue them. This Battalion as a part of the British 27th Brigade arrived in Youngyu-ri and attacked the North Korean defense position with tank battalion's support. It captured the enemy's position and made a connection with an airborne brigade. The Battalion accomplished many big achievements with only little loss in this battle. Later, this Battalion along with a British brigade continued the northward advancement

When the cease-fire talk began including discussion on the establishment of the cease-fire line, this battle was the operation in which the Australia 3rd Battalion attacked and captured Maryang Mt, 10km north of the Jeongok area defense line during the Commando Operation launched by the U.N. Forces to secure a favorable defense line before the establishment of the cease-fire line. This Battalion repeatedly defeated the Chinese Communist stiff resistance and captured Maryang Mt. The success of the Commando Operation allowed the U.N. Forces to secure the road network over Cheolwon - Yeoncheon - Seoul.

After the cease-fire agreement, the Australia Air Force was withdrawn from Korea in Oct. 1953, Naval Force in Feb. 1954 and ground troops in Mar. 1956.

Map of the major battles 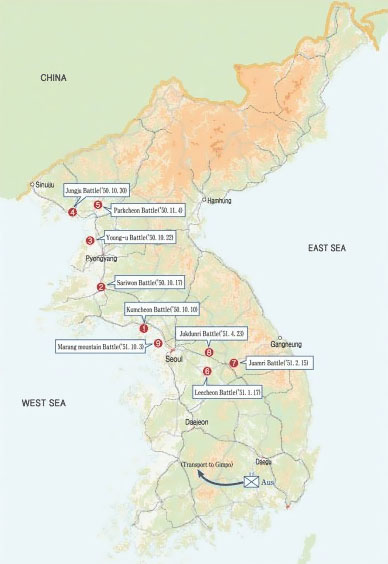